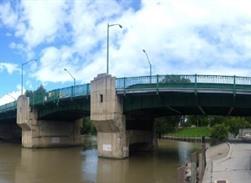 The Fifth Street Bridge crossing the Thames River in downtown Chatham was constructed in 1930 and is currently in fair to poor condition.

The Fifth Street Bridge (over Thames River), Community of Chatham will be closed to all vehicular and pedestrian traffic starting Thursday June 29, 2017 until December 22, 2017 for rehabilitation.

The rehabilitation project consists of removal of the existing Fifth Street Bridge superstructure, rehabilitation of both the abutments and centre piers, installation of new structural steel and concrete decking. Also included are the relocation of Bell Canada utilities onto the new structure, roadway reconstruction in the vicinity of the structure and the reconstruction of the traffic signals at the corner of King Street and Fifth Street.

The structure will be reopened to the public later this year with the balance of any remaining work being completed by June 20, 2018. Work completed in 2018 may require some lane restrictions which will be communicated at that time.

A Public Information Centre was held on February 9, 2017 to present the recommended solution for the bridge for public feedback.

For more information go directly to :