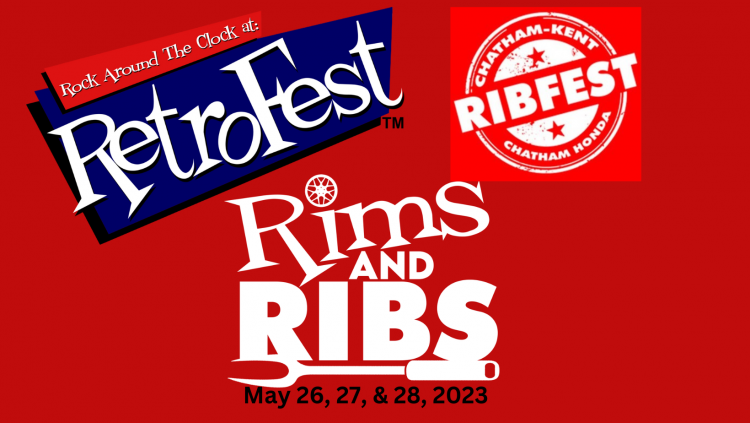 Media Release
for Immediate Release
Thursday, January 12, 2023
RIMS AND RIBS
RetroFest™ and Ribfest Chatham will be held on the same weekend – May 26 – 28, 2023
Two of Chatham’s best attended events will be combined for one “SUPER” event that will encompass all of downtown Chatham and Tecumseh Park. RetroFest™ and Ribfest Chatham will be held on the same weekend this year. With the announcement of Tecumseh Park closing for renovations the two groups decided that teaming up would be the best solution for the residents, exhibitors and sponsors that enjoy the two events so much.
“When we were approached by RetroFest™ to have both events on the same weekend we had to give it some thought,” said Connie Beneteau, Project Manager of The Historic Downtown Chatham BIA (HDTCB). “RetroFest™ is one of the top 100 Festivals in Ontario and we wanted to be mindful of what attendees expect. We met with the Kent Historic Auto Club, who is our partner for RetroFest™and discussed the idea, everyone agreed that a change would be welcomed.”
Summit Shows Canada, the organization that hosts Ribfest Chatham, indicated that it was a real blessing that RetroFest™ was willing to combine events, or Ribfest probably would not have happened this year.
“This is a perfect example of how event organizers are willing to work together,” said Nancy Dudley Co-Chair of the HDTCB, “we believe that this years “Rims and Ribs” weekend will be a great time for all.”
The regular cruise on the Friday night for RetroFest™ will be modified, along with some enhancements of the activities in the park Friday through Sunday. The updated schedule of the combined events will be announced shortly at a to-be-scheduled Media Day luncheon.
———————————————————————————-30————————————————————————————-
For additional information or interviews:
Connie Beneteau
HDTC-BIA, Project Manager
519-352-8387
downtownchathambia@gmail.com
Wednesday, January 11, 20